To recover your password please fill in your email address

Please fill in below form to create an account with us

A threat to our environment.

In 2018, the EID initiated an Aquatic Invasive Species Prevention Program. All boaters wishing to access EID reservoirs must follow approved prevention procedures and complete a watercraft information form stating they will not knowingly spread aquatic invasive species. As part of the program, trailered watercraft must only be launched from approved boat launches and boaters must check in with the campgrounds, marina, or EID office before launching. Canoes, kayaks, and other non-trailered watercraft may continue to be launched at random locations, but the boaters are still required to check in with the campgrounds, marina, or EID office prior to launching. Boaters can visit Lake Newell Resort Marina, Rolling Hills Campground, or Crawling Valley Campground to register for the program.

Failure to participate in, or abide by the protocols set out by, the EID AIS Program will result in loss of access to EID lands & reservoirs

Please clean, drain, and dry your watercraft before moving to a new waterbody and do not release garden plants or pets into the wild.

Please see below for information on Aquatic Invasive Species. 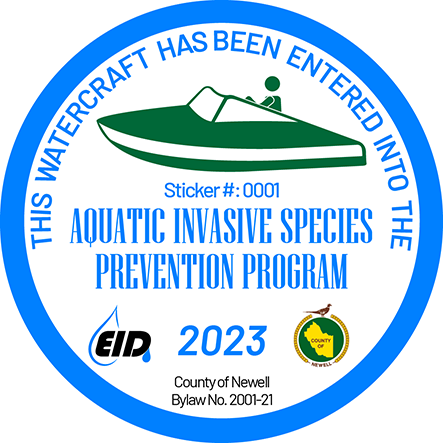 Zebra and Quagga mussels are freshwater mussels, native to Eastern Europe that can permanently attach to any hard surface including docks, watercraft, rocks, water conveyance intakes, pipelines, previous generations of adult mussels, and even grains of sand. They are prolific reproducers with female mussels releasing up to one million eggs per year into the water column. Zebra and Quagga mussels are very small, usually growing between 1-3 cm long, filter feeding on microscopic organisms and disrupting the food chain for native fish and invertebrate species. Adult mussels can survive up to 30 days out water, given the right temperature and humidity levels, and the microscopic larvae of mussels (veligers) can survive within water in bilges and live wells for a number of days.

Zebra and Quagga mussels can be found throughout the Great Lakes, Lake Winnipeg, and the Mississippi River watershed. A Zebra or Quagga mussel infestation in Alberta is estimated to cost over $75 million annually and can cause millions of dollars in damage to water-operated infrastructure, disrupt natural food chains, create toxic algal blooms, decrease property values, and hinder recreational activities. 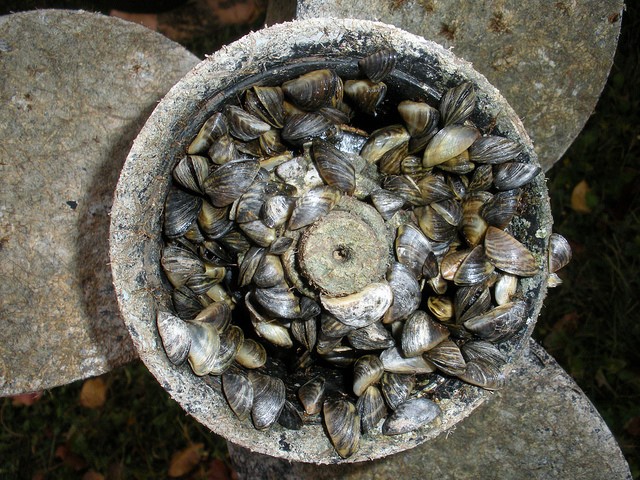 Flowering rush is a cat-tail like perennial plant which thrives in moist areas on the edge of water bodies or submerged in deeper water. It is able to reproduce by seed and vegetatively through rhizomatous bulblets which separate from parent plants. Once established it forms dense mats of vegetation choking out native vegetation and disrupting fish and wildlife habitat. It was likely introduced into Alberta as an ornamental garden plant.

Flowering Rush is extremely difficult to control. Cutting and hand digging is feasible with small populations, however attempts must be made to remove all of the plant as any small piece of root fragment has the potential to regrow and start a new infestation. Cutting and hand digging must be ongoing until all traces of the plant is removed and regrowth does not appear which is usually very difficult to achieve. There is currently no chemical control measures to eradicate this invasive plant due to its growth within and in proximity to water bodies.

Flowering Rush is present in a few lakes, rivers and reservoirs in Alberta. 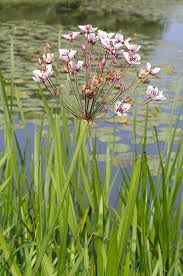 Prussian Carp (Carassius gibelio) a type of goldfish native to central Europe was first discovered in a single southern Alberta lake in 2006 and has now established breeding populations in water bodies through the Red Deer, Bow and South Saskatchewan river basins. We do not know how the fish was introduced. It is probable that it was released through an aquarium or backyard pond dumping or through contaminated bait.

Prussian Carp are hardy and reproduce rapidly. They are adaptable and able to live in aquatic environments with low oxygen levels, such as dugouts, and are tolerant of pollutants. They can also survive out of water for relatively long periods of time. Females are able to reproduce one to two years into their lifespan and can spawn up to three times per year.

Should you catch a Prussian Carp while angling, please kill it and either take it home to eat or properly dispose the carcass away from any water bodies.

The Eastern Irrigation District is collaborating with other irrigation districts and the Government of Alberta in support of the fight against the introduction and establishment of aquatic invasive species into Alberta’s waterbodies.

The 13 irrigation districts, all located in southern Alberta, including the Eastern Irrigation District are especially concerned with Zebra and Quagga mussels and have collaborated on several projects to prevent the establishment of mussels in Alberta. Through the Alberta Irrigation Districts Association (AIDA) a trial Mussel Dog Detector Inspection Program was brought to Alberta in the spring of 2014/2015. Dogs trained to target mussels by scent were deployed at Alberta commercial vehicle inspection stations (VIS) to efficiently and effectively search for mussel infestation on high-risk watercraft travelling into Alberta.

The program proved such a success that in 2015 the Eastern, Bow River, Taber, Lethbridge Northern, Raymond, United, and Western irrigation districts funded the training of four Mussel Detection Dog teams for permanent deployment within the Province’s AIS Inspection Program. In March 2015, the Government of Alberta announced mandatory inspection of all trailered watercraft entering Alberta from any other province or state with AIS Inspection Stations established at most Alberta commercial vehicle inspection stations.

An invasive species is an organism not native to an area or ecosystem which when introduced establishes readily and alters the ecosystem, almost always with negative results, and are almost impossible to eradicate.

Aquatic invasive species are extremely detrimental to Alberta irrigation because they will:

What can YOU do to prevent the establishment and spread of aquatic invasive species into Alberta’s waterbodies?

Due to their physiology, mussels are small and can attach to numerous small crevices and cracks found within watercraft and because of this are sometimes not visible upon observation. Adult mussels can survive up to 30 days out water, given the right temperature and humidity levels, and the microscopic larvae of mussels (veligers) can survive within water in bilges and live wells for a number of days. Given this, it is easy to see that an infected boat transported to a different waterbody may easily infect the new waterbody without the owner’s realization.